The Freelance Clinic: What to do when a client won’t pay 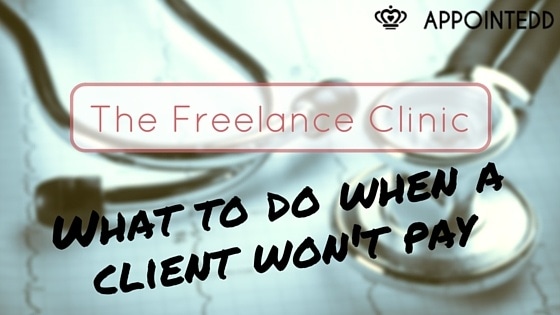 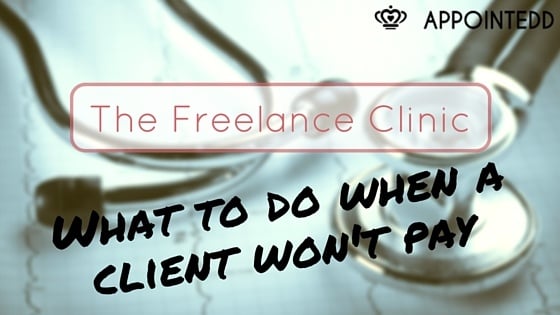 Now here’s an issue that likely every freelancer ever to lance freely has had to deal with at some point: the late payment, or worse, the non-payment. It’s a huge problem, especially if you’re still working to establish yourself and every single payment is vital to the continued success of your business.

Unfortunately, it’s the way of the world that there are plenty of people out there who’ll try it on and see if they can get something for nothing. Back in 2012, freelancers banded together online to create the world’s longest invoice, made up of all the outstanding payments they never received. One self-employed tradesman I spoke to made the assessment that “On a job, everything is fine until it comes to money… that’s when people get weird.” He also mused that it was more of a problem when working for someone you know outside work: “I’ve never had a problem being paid by clients who are just clients,” he said, “It’s always the family friends that take the-”

Well, you get the idea. The point is, it seems to be the case that the more casual the arrangement, the more you’re playing with fire when it comes to being paid in a timely manner. Which is not to say that an iron-clad contract and the most ‘strictly business’ working relationship in the world is a completely fail safe defence against No-Pay Polly – this is something that, like being caught in the rain, or finding a tiny wee slug in a salad, can and does happen to anyone.

But this is all still just diagnostic, so it’s about time we got around to the cure. Or rather, in this case it’s more like a course of treatment, in that there really isn’t some magical solution and even if you do everything right, there’s still a chance you’ll end up not getting that money. But there are some steps you can take to approach the situation.

Firstly, it’s best to give the client the benefit of the doubt that there has been a genuine mistake. Make sure all your communications about the lack of payment are polite. Best case scenario is that it’ll be speedily and apologetically resolved, and there’s no need to burn bridges at this point with an attacking email. It could even be appropriate to ask if there’s some problem for them and whether there’s a way of minimising the issue of payment, such as an agreed installment plan.

From here there are basically three possibilities:

1) The client responds pays, and all is well.

2) The client responds, telling you that there is some reason why the payment was not paid on time, but that it will be paid

3) The client does not respond…

To avoid waiting around forever and day to see if they’re going to get back to you, it’s very important to have a plan in place that you will strictly adhere to in any instance of No-Pay Pip rearing his head. A couple of days is plenty of time for them to reply to your initial message in this case, because time is of the essence, and if after that amount of time you still haven’t been paid and haven’t heard anything from the client, it’s time for round two of follow-up. This second message should be firmer, but still polite. You want to be professional, not childish, and keep reminding them of what was agreed and by how long the payment is now overdue. Where possible, always communicate in writing, so that you have a record of what was and was not said, and when. If you also want to call or meet in person because you feel it would be more effective, which it often is, then be sure to send a follow-up email recapping what was discussed and agreed.

There’s also the option of automating your late payment reminders to be sent out regularly from the day the payment becomes overdue until you get paid, which could take some of the pressure off you and stop things getting too heated. You can do this really easily with systems like FreeAgent (with whom Appointedd collaborate for invoicing and taking payments online). It might be that the sheer pestering and mithering inspires them to square up, just to stop the barrage of annoying emails and/or letters.